The impetus behind such ‘tiny’ movements, whether it’s homes (that we spoke about a few issues ago) or in this case forests, is the same – to offer a sustainable solution for our planet. This marvellous blue marble we call Earth is burning, and as cities spread its wings farther and wider, it claims its biggest victim – nature. With the world population increasing, we need more dwellings, and these urban landscapes continue to contribute more towards climate change and biodiversity loss.

There seems to be no silver-bullet solution but what we could do is create resilient bubbles of nature through the Miyawaki Method.

A Japanese botanist and expert in plant ecology, Dr Akira Miyawaki has advocated the urgent need to restore natural forests for years. In 2006, he won the Blue Planet Prize for his Miyawaki Method of restoring and reconstructing forests.

The method stresses on field investigation to build indigenous forests by indigenous trees that ensure plant growth is faster and denser than usual.

Miyawaki has planted more than 1000 such forests in Japan, Malaysia, China, and elsewhere, and the method has been adopted by others in Europe and India. And now, New Zealand is about to get its very own one.

It all started last year when Nelson-based Colin Davis read about people in Bengaluru, India using the Miyawaki Method to plant trees in small areas. He approached AJ Clarken – a fellow committee member at the Nelson Whakatu Muslim Association – with the idea of planting a micro forest on his property.

“I jumped at the opportunity to help manage the project, as it involves planting trees, something I wish more people would do,” says Clarken.

From there, it was a process of talking to the Nelson City Council, who directed them to their environmental grants, and conversations with forestry experts, and, of course, lots of reading.

In many ways, Davis and Clarken seem from the opposite ends of a spectrum.

“Colin is a vegetarian, and I fill my freezer with meat I’ve hunted myself,” says Clarken.

“Colin is a boomer, and I am a millennial. We are on different political spectrums. It would seem we are chalk and cheese but doing this project has brought us and many others from different countries, creeds, and faiths together for a common cause.”

This common cause is to tackle the escalating effects of climate change by planting micro forests. Think of these forests as almost like micro-lungs for urban areas to breathe.

“A micro forest is just as it sounds – a forest that is really small. Under the Miyawaki Method, it can be as small as 30 square meters. Many suburban backyards could support a micro forest.

“The idea is to set aside a small area and plant native trees densely to support the ecosystem. Doing this creates a home for our native fauna and can create a pathway for our birds and insects to travel as they would without our concrete jungles. It is also a great way of sequestering carbon from the atmosphere,” says Clarken.

The micro forest being planted in Nelson is on the north-facing side of a hill that had little practical use to the owner. Around 100 square meters have been set aside for the project.

“We will space the trees roughly at intervals of 600mm and will plant the species randomly. It is situated on the outskirts of Stoke – a suburb just outside of Nelson.

“We have a local nursery providing the trees. There will be around 20 to 30 different species, totalling around 300 trees. We have let the nursery choose which species will be best but have requested some rimu, beech, kowhai, manuka, and hebes, as we want to have a diverse mix of species and sizes.

“Other than tree species, the method we’re using is essentially the same as what has been done globally. We have followed the Miyawaki process as much as practical.

“One point of difference is we are also utilising biochar (charcoal), which we are making ourselves from trees that had to be felled, and weeds – all waste products from the property. The burners we are using to make the char product were made from drums from a local painter that was headed for the landfill. A number of specialists advised us that this would help with the clay base soil we are growing trees in.

The Nelson Whakatu Muslim Association, which Clarken and Davis are members of, have been at the property most weekends since December helping out. They have also roped in neighbours, friends, and colleagues.

“It has been amazing to see how willing people are to help, especially when they hear what we are trying to achieve.”

The biggest incentive is to reduce carbon footprint but on a personal level, Clarken says he and Davis want to create something that outlives them and makes New Zealand and the world a better place for their children and beyond.

“We hope this project inspires others to do the same. We have set up a Facebook page to share our experience. The claims that micro forests can sequester carbon 30 times greater than standard planting was a great appeal to Colin and I was keen on doing something that will help our native flora and fauna.”

The response from the wider Nelson community has also been encouraging, with people contacting them to help them build their project and others who want to support the duo in their aspiration to get schools and other organisations to plant their own micro-forests.

Clarken and Davis hope that their initiative in Nelson educates a new generation of kids to learn how to restore forests and teach them so they can go and plant bigger forests when they grow up.

“We planned for this to be the first of many. As Colin has more property available, this may be stage one of many, but we also hope to get schools on board and inspire children to get involved in their own plantings.

“We are also looking to talk to the local council to see if we can get them to plant in green spaces and playgrounds. We have set up the Facebook page to allow people to see what we are doing and give them a forum to ask so we can guide them on how we have done it or offer advice where they see we are going wrong.”

And as daunting as it may seem to build your own forest, Clarken says not to overthink it.

“Don’t be scared. Try to find others who are doing it; most people are willing to share advice and often get stuck in. Talk to a local nursery about the plants they can provide for your area and then make it a reality and do it.

“Also, don’t forget to talk to the council, as they may have grants available or know what groups are already doing it.”

Love for the outdoors

Clarken has been in Nelson for nine years. With the ocean, mountains, forest, and lakes at his doorstep, he says he doesn’t really have to travel anywhere in New Zealand.

“We have three national parks within an hour’s drive, with plenty of day walks and camping/hunting opportunities.

“My family frequently walks around the tracks on Richmond hills, which is a five-minute walk from home or sending out the Kontiki for some snapper from the local beach.

“I like to travel over the Takaka hills and shoot some goats, which makes me feel doubly good, as it fills my belly and it’s pest control at the same time.”

Over Easter weekend, 260 trees were planted on the section. Four hours of hard work were put in by Davis and Clarken and a team of 40 volunteers (including cooks and children) but it was worth the effort. A few were even inspired to take a couple of trees home to plant. The next step would be to water and weed for a year or two while plants establish. They are also in talks with a few groups to plant some more around Nelson. 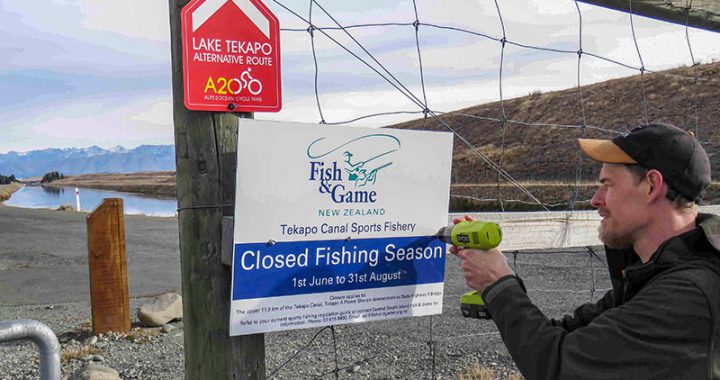