For most anglers, a quick ‘grip and grin’ photo is the easiest way to document their catch. And with smartphones in pockets, it’s easier than ever to take a quick selfie, share it on your Instagram, and then wait for comments and likes to flow in.

But more than 100 years ago, when smartphones were a distant dream, fishermen in Japan created gyotaku prints to record their trophy catches. This traditional and beautiful Japanese art involves fish pressed into a pool of ink and printed on paper. While in its heyday, gyotaku was used for bragging rights, today, it has evolved into modern art.

Gyotaku translates into ‘fish’ (gyo) and ‘rubbing’ (taku). The art has been generating interests around the world, and now, thanks to Poppy MacIntyre and Daniel Rogers, it has been brought to our shores.

The Auckland-based duo, who love the ocean and are keen spearos, printed their first fish, a john dory, at the beginning of 2017 (Dan was gifted a gyotaku kit for Christmas by his family) and loved the process.

“It was so cool that we could have a life-sized perfect impression of a fish on our wall,” says Poppy.

“We continued to print our personal bests, records, and favourite catches throughout the following years to put up around our house.”

The process involved a lot of trial and error, with every species bringing its own challenges on the table, but Poppy says they’re learning new tips and tricks along the way.

“Whether it is the size of a kingfish, the long dorsal fins of a john dory, or the large scales of a snapper, every fish is different. The learning process has been one of the most exciting parts for us, and it is so exhilarating when we peel off a print and it’s a good one.”

What started as art pieces made for their wall space at home soon turned into a business idea. And with encouraging feedback from visitors to their home, they started Gyotaku NZ – an online platform where they sell their original and handmade work to Kiwis around the country (they also ship to Australia).

But they hit the first bump on the road was when the pandemic hit and along with it came the lockdowns and restrictions.

“Lockdown threw a spanner in the works at the start of 2020, as we were unable to get out in the boat to get fish, but we worked at it throughout the year until we had enough prints to start a website and go live in January 2021,” says Poppy.

A month into the new year, Poppy says they’ve been receiving a great response so far.

“People have been so supportive and are so keen to find out more about the process of printing a fish, for which we are so grateful. It is so lovely to see the support that Kiwis show to small and local businesses.

Printing the fish is a delicate and lengthy process and often takes a few goes to get the perfect one.

“It needs to be flat and dry to achieve a good one. We use the traditional Japanese washi paper and ink, although, we are experimenting with other media currently,” says Poppy.

They take multiple prints per fish, but every print is individual and unique. Each fish may have between one and 10 individual prints taken from it, says Poppy.

Fish is hand-selected – they are both free divers – and while it is helpful to free dive in the selection process, the downside is that as spearos, the fish always has a hole in it from the spear.

“It is important to shoot the fish in the right spot to prevent fluids from leaking onto the page in the printing phase. We have found that the head or gills tend to work the best. Also, crucial to remember is to iki (humane killing of fish) the fish on the side that you will not be printing to again prevent leakage.”

The most interesting part of the entire process is that once the art is completed, the fish can be eaten.

“We love that we can still eat all of our fish after we have printed them. The ink is only put on one side of the fish and only on the scales, so it can easily be rinsed off once we have finished printing, and voila, fish and chips!”

A quick look at their website and you’ll notice some of their recently printed kingfish and snapper tails, john dory, boarfish, a big snapper, pink maomao, and trevally. A few more work-in-progress projects will soon be added to the collection.

“My favourite print is of the john dory, which is also my favourite fish to hunt,” says Poppy. I like the texture of the print due to the lack of scales. I think that john dory are such a unique-looking fish and you certainly can’t complain about a built-in target.

“Dan’s favourite is the kingfish tail print. The fine scales on a kingfish make for such a great-looking print.”

While the online collection features their favourites, they’re also open to taking commissions.

“We have done a few commissions for people in the past, and these have been a success. We recently printed a two-piece, personal best, 19lb snapper that my dad speared over Christmas, and we were all so happy with how it turned out.”

Which leads us to the other side Gyotaku NZ, which will be up and running in the near future.

“We are working on a system where fishermen and spearos can bring their fish to us and we can print their catch for them. It is such a great way to remember and document your catch and it would be so cool to offer this to people so they can have a piece of artwork for their walls with a fantastic memory attached to it.”

On the other side of the fish art spectrum – although not too far – is Gary Longley, who’s style is to “realistically depict the marine life” by sketching them in dynamic poses as opposed to what he calls “frying-pan shots” where the subject is placed side-on.

Take a quick look at the photos of his artwork (see page 2) and you’ll know what we mean.

“I like things to be anatomically correct, so I work with a graphite pencil to get the detail I want. I have tried charcoal but found it messy, and I’m useless with a paintbrush. Also, I find working in black and white gives images a different feel and impact that you don’t get with colour. Having said that, most fish are very colourful, so I try and recreate with contrast and lighting to give the effect of a wet or shiny fish.”

As a kid, Gary says he loved sketching. His father was a keen diver and fisherman, so they spent a lot of weekends on the water.

Seven years ago, he was diagnosed with a rare autoimmune disease, which forced him to quit work as a quantity surveyor, and about three years ago, he picked up a pencil again and started scribbling, and just carried on from there.

“When I first started, I wanted to please everyone’s tastes, which is not possible, so I just thought I’ll start with the more popular species to cover the basics and go from there. I basically draw what I enjoy,” he says.

“Through researching thousands of reference photos, I get ideas of different species and how I want them to look. Each drawing is made up from at least half a dozen different images, firstly to get around any copyright issues. Also, there are few photos anyway where everything is just right – pose, eyes, fins, lighting, etc., so it’s a bit of a cut and paste in my head to bring it all together.”

Gary admits he’s not a patient artist and so tends to lean towards drawing fish without scales.

“Scales can take forever. However, fish have them funnily enough so when I do one with prominent scales, it is satisfying to finally complete them.

“I think tuna would be up there among my personal favourites, as I just love the way they’re built and the different designs they come in. It’s also fun trying to get them looking shiny and metallic, which is always something I’m trying to improve.

The Tauranga-based artist also takes commissions if someone wants something a bit different or uncommon.

“The drawings I do, I try and do something that hasn’t been done before either, so they are a bit unique anyway.

“Prints are a popular and a cost-effective way to get some fine art on your wall.”

Recently, he has also taken up doing custom fish, chart, and boat prints, which have been popular.

“As my name gets out there, people are interested in stuff they haven’t seen or been able to get before. Something as common as a kahawai is underrated but also popular. And the navigation charts, with a fish of your choice, have also been a winner.”

His growing popularity has also seen overseas orders coming in. Closer to home, he exhibits at the local boat shows and is a sponsor for the Tauranga Sport Fishing Club Fish n Chicks Tournament coming up and is working on getting pieces up in other fishing clubs too.

The next chapter will see Gary work on casual lifestyle apparel with the help of his wife Paulene, who is a surface pattern designer and takes care of the digitising side of things.

‘“I have also been looking into putting my artwork on lures. I have had a couple of prototypes done by one of New Zealand’s leading trolling lures makers, so that’s in the works.

“Recently, we started importing JigSkinz from the US too, which are a photo-realistic heat-shrink sleeve you can place over your lures, stickbait, poppers, etc. Dip them in boiling water and they shrink to the shape of the lure, which brings them back to looking better than new. So that’s been an exciting addition.”

Always keen to get out on, in, or under the water, Gary says one of his favourite haunts was Astrolabe reef off Tauranga till someone parked a ship on it.

“[I] caught many kingfish there, including a 36kg one that won the Nationals one year, as well as hooking a few marlin and sharks. ‘They’ are now looking at turning Motiti Island and surrounding reefs into Marine Reserves, which I don’t agree with.”

But we guess that’s another story for another time. 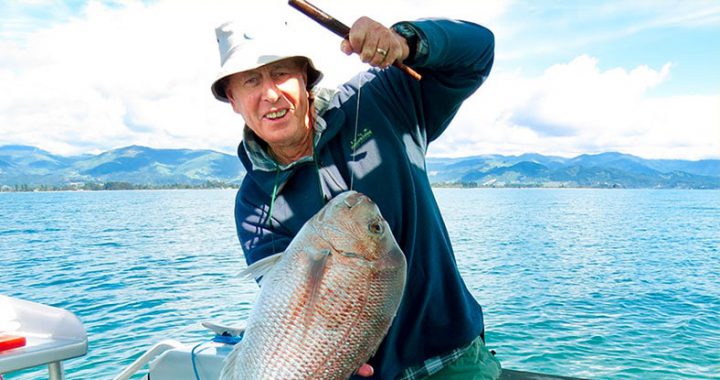 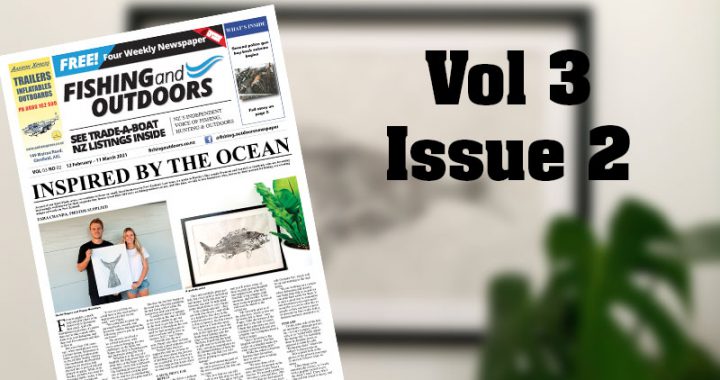 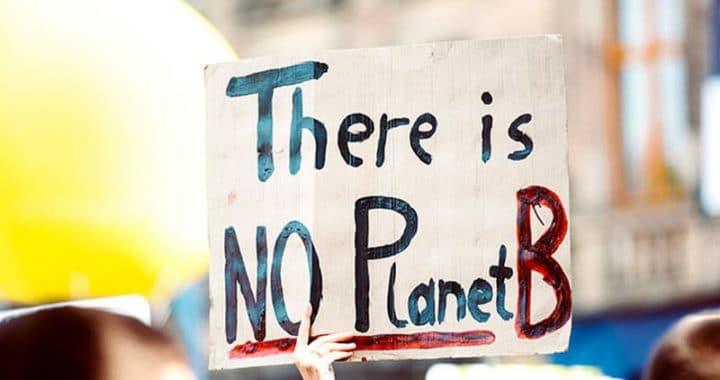